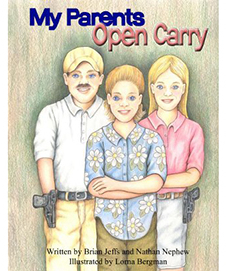 Authors Brian Jeffs and Nathan Nephew have written a new book for children, My Parents Open Carry, aimed at explaining why someone would choose to carry concealed. Brenna Strong, the 13-year-old main character, spends a typical Saturday with her parents, law-abiding citizens who choose to open carry handguns for self-defense. According to MyParentsOpenCarry.com, "The Strongs join a growing number of families that are standing up for their 2nd Amendment rights by open carrying and bringing gun ownership out of the closet and into the mainstream."

People who aren't accustomed to owning guns, let alone carrying them (whether open or concealed) daily, may think the idea is scary or absurd. I can say that I was one of those people, until I was properly educated. Training programs such as those taught at GunSite Academy in Arizona, are a great way to obtain the know-how and become more comfortable carrying a firearm.

Carrying a firearm on your person is a very personal and serious decision. My Parents Open Carry gives families an opportunity to have a positive discussion about the Second Amendment and what it means to carry a firearm for self-defense.

3 Candidates For Your One and Done Gun

5 Tips to Safely Store Your Guns

END_OF_DOCUMENT_TOKEN_TO_BE_REPLACED

This precision wheelgun was designed for sharpshooters, but it's versatile enough for so much more.

Video, On The Range

This majestic mule deer in velvet was taken according to Pope & Young's principles of fair chase.

How to Spot Dangerous and Dud Ammunition

If the ammunition shortage and price hikes have you looking for alternate ammo sources, here's what you need to know.

Imagine a family feud so ferocious it left a mark on the language...

These up-to-the-minute seminars are led by world-renowned instructors and shooters ... and they're all free!

Shotshells: Interpreting the Numbers on the Box | NRA Family

on the range, bergara, b14
END_OF_DOCUMENT_TOKEN_TO_BE_REPLACED
Rising Shooting Stars

#SundayGunday: Benelli BE.S.T. Lupo | An Official Journal Of The NRA